In today’s world, the so-called “Technology Age” and “Information Era,” there’s no doubting the large-scale impact rapid communication and technology has had and continues to wield on reading, writing, and spoken language. Think about it: “LOL,” “JK,” and “TY” are not only seen as acceptable in many facets and fields of communication (written or spoken), but as mainstream. Just today I heard a young woman pepper her conversation and respond with “LOL” and “JK, JK,” while talking on the phone. There’s no denying how “Text talk” has made the leap from not just being tapped out on screens, to being actually spoken in everyday life.

Cringing? Being a self -professed book worm, word nerd, and (insert GASP) dreaded Grammar Nazi, “Text talk” sometimes rubs me the wrong way, given the context (don’t you dare use numbers as stand-ins for words in academic papers)! But that doesn’t mean I haven’t typed out texts to my BFFs (best friends forever!) in a series of letters and digits (“cant wait 2 chill w/ u! its been 4evah!”) But I digress…

The abbreviations, omitted punctuation, and substituted spelling of “Text talk” is just one key example of how technology has changed how we learn and use language itself. And with the advent of social media: BOOM! Alphabet soup (or how about stew?) indeed. But considering how many gripe about this form of communication…is “Text talk” really a sign that the English language is deteriorating, as many would have us believe?

Say this aloud and you’ll draw the attention of the Grammar Nazis (i.e., your parents, teachers, or even a coworker). After all, this sentence is incorrect. You can’t say a double negative in English. The two negatives cancel out one another, so the sentence really means, “I did do something!” Double negatives just don’t align with the rules of English grammar.

This is prescriptivism, the concept of how language and communication should be. In other words, there are rules to follow. Function and form is key. Break these rules, and your own form of speaking and writing is “wrong.”

Descriptivism, however, aligns itself with how language is utilized in real, everyday life. Slang and acronyms are great examples. For instance, are you fond of saying “ain’t”? Nothing wrong with this word, as that is what you use when speaking. Descriptivists aim not so much at correcting an individual’s speech or writing, but instead observe and take into account how language is actually used. So, while the phrase “I ain’t never seen nothing,” is grammatically incorrect, viewed with the prescriptivist lens, it is a valid statement.

Before you go all Hunger Games and feel that you’re pitted against an adversary of your language views, you must know this: language is not a fixed thing. In fact, it is a living thing. Don’t believe me? Take a look at any Shakespearean play (not the modern day transcripts on SparkNotes). Confused and frustrated already by what you’re reading? You see, language is ever changing. What Shakespeare wrote and spoke was “normal” in his day, but to communicate in that way today? You’ll garner laughs and weird stares alike.

All languages are forever dropping and gaining new words, new phrases, and even new grammar rules. Believe it or not, once upon a time in English, double negative usage was not only acceptable, but grammatically correct. That is until a Robert Lowth penned A Short Introduction to English Grammar in 1762 and decreed that, along with other grammatical rules and restrictions, such usage is incorrect. Hmm…can’t help but wonder what Mr. Lowth would have to say about “Text talk.” So, given that languages are chameleons…can one still make the claim that a language is deteriorating? Improving? Which leads to us to speculate: what is the relationship of prescriptivism and descriptivism with today’s educators? And how does technology play into this?

The role of an educator is, obviously, to properly educate and mentor students in whatever it is they are learning. If a teacher is teaching the wrong spelling or improper grammar rules, then they are failing their duty. This is especially true when first teaching children the fundamentals of how to read and write, which in turn affects their manner of communicating: educators must establish and encourage their students as to what is sound and correct, in “doing it right.”

Education is more than just teaching the “rules;” learning is also being exposed to the realities of how knowledge is actually used and applied in the real world. I am not advocating that “Text talk” be taught in schools (chances are your kid beats me at txt tlk, lolz!), but rather that both teachers and students keep an open mind as to how language is utilized in daily life. The “correct” and “right” way(s) of communicating does not equal that there is only one correct way to communicate. Just as thousands of different languages exist, different variants within a language exist (dialects), just as each individual possesses his or her own unique way of communicating (idiolect). Then factor in how the aspects of gender, culture, age, class, etc., are reflected in spoken language and written communication, and vice versa. The long-held idea of “Standard American English” suddenly appears a bit shaky. How does my “Standard” of English sound to others’ “Standards?” Who is the Snob and who is the Slob?

For educators, especially, technology can be viewed as both a boon and a curse when it comes to instructing and communicating, whether with other academics or with their students. I remember college professors (yes, you read college) scolding students to refrain from using texting abbreviations in their papers – yikes! Spell Check can both help and hinder, for while correcting spelling and checking grammar, it is not a foolproof function. A human is always a better proofreader than any computer or machine, and heavy reliance on Spell Check sometimes leads students to neglect or miss mistakes the function has failed to mark. And with instant information nearly available at all times, plagiarism is all too easy, as anyone can cut-copy-paste anything and claim it as theirs.

On the flip side, however, technology can certainly enhance – and strengthen – the learning process. Just as a person can rip off another’s work, sites such as turnitin.com, for example, check written pieces for any evidence of plagiarism. With the Information Age being as widespread as it is, there are various computer programs/ online courses tailored to specific subjects, for different students. Peers can interact and collaborate on group projects, discuss a topic for class, and just offer help for one another.

With the pluses and cons that result from where technology, communication, teaching and comprehension intersect, it is key to keep context in mind. Scholarly works call for higher register and grammatically correct writing, just as a public speech demands precise and skillfully crafted language. Occasion also affects whether you take on more of a persona of the Snob or Slob. You wouldn’t dare curse in front of others at church, and you wouldn’t talk smack to your kindly grandmother. But one needn’t be a snob around friends, as you joke with one another in a manner that is casual and lower register. One doesn’t have to be staunchly Prescriptivist or Descriptivist; both are needed. The key is finding balance. Educators may take the prescriptivist approach, especially with adolescent pupils, in establishing the groundwork in how to read, write, and communicate. But fostering creativity is also the educator’s job, and descriptivism permits this. Therefore, educators must understand when to encourage and enforce the rules, and when to both engage in and acknowledge the realities of actual language use.

In the end, we do need rules. If we did away with rules completely, and each and every one of us took up our own manner of speaking, it’d be the Tower of Babel all over again, communication rendered inefficient. Hardly anything would be accomplished! But a break from the rules is also needed, as variance in how language is used allows our individuality and creativity to show. Think about it: if everyone spoke and wrote exactly the same, the world would sure be a boring place.

About Leah: A true word nerd and book worm, Leah earned degrees in English and Spanish at Colorado Mesa University. She served as Managing Editor for the 2015 issue of Pinyon, CMU’s national journal of poetry, prose, and art.

Back to Basics: Thinking Maps 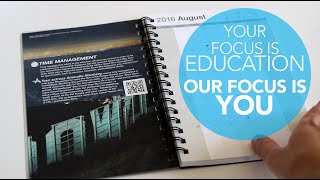 Back To School Is Just Around The Corner

How a Student Planner Facilitates Learning

"3 Proven Ways To Get Respect"

5 Ways Responsibility Will Improve Your Life

Staying on Track: The Importance of Time Management and Organization

The Minimalist’s Way To Time Management

I, Us, All, and Kindness

Tis the Season for a Successful Holiday

A Coloring Book Designed for the Mental Gamers